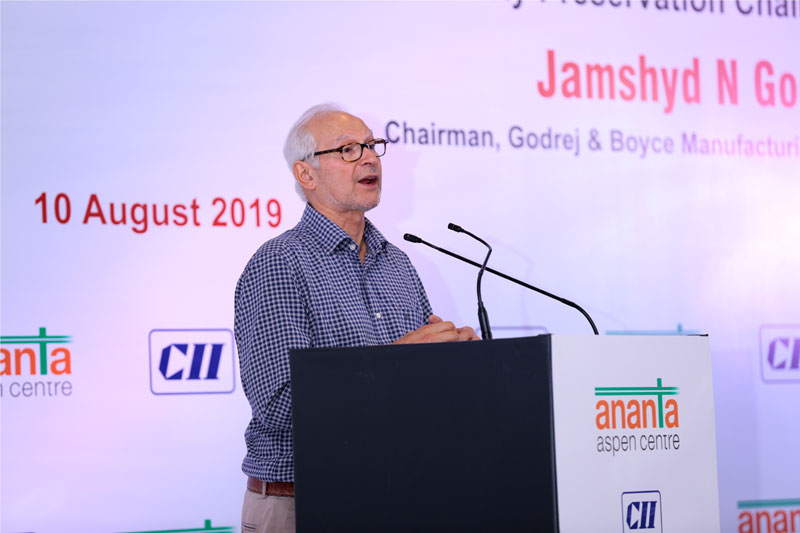 “What I want to focus on today is that every one of us here and not only in India but in the world, needs to appreciate the type of crisis that we are in and take credible actions in a way that not just improves their daily life but changes the lives for everyone in the world” – Jamshyd N Godrej, Aug 10 2019.

Most businesses today have a stand that climate change is a crisis for the future. Scientists have said that it is a tipping point in the world which if exceeded by two degrees by the end of this century can cause catastrophic changes. Speaking at the 8th Memorial Lecture organised by Ananta Aspen Centre, Jamshyd N Godrej delivered a discourse on how climate change has become a crisis due to our negligence in approach to address the problem. Whether it is flowing water or groundwater, every one of these are in a crisis situation. Food has become severely affected due to our anthropogenic needs. Tuna stocks have almost disappeared in the Mediterranean. The absorptive capacity of oceans have almost depleted due to the high levels of carbon dioxide present in atmosphere.

Air Conditioner today has become an essential household item. The problem with most ACs is that they are not Green Building friendly owing to their huge costs. Ozone hole is severely getting affected because of our choices. However, Simple Solutions exist, Said Mr Godrej. Many countries in Europe have shown a way of eliminating these polluting refrigerants and emphasise on using Propane, a natural substance.

Today, Water has been commodified in Chennai. It has been brought for drinking purposes via train. Industry and Government has a greater role to play in conserving water. Water pricing is crucial, and that will make even farmers realise that they cannot keep their pumps on 24/7. Reuse and Recycle is a school taught concept, and we tend to ignore it in our daily chores.

Intergovernmental Panel on Climate Change (IPCC) has highlighted in its report that ‘climate crisis’ today would mean hotter and colder days. Climate system will go in extreme situation. Climate crisis has become an alarming situation because it is hanging on the fence due to addressing issues of Development and Conservation on the same parallel.

CK Prahalad Memorial Lecture is an annual event jointly organised by Ananta Aspen Centre and Confederation of Indian Industry (CII) to commemorate the legacy and contribution of Late Professor CK Prahalad to shaping the idea of India as a Morally, Economically and Technologically advanced nation, capable of leading the world. Professor Prahalad, held as amongst the finest thinkers of his time, was the Paul and Ruth McCracken Distinguished University Professor of Corporate Strategy at University of Michigan, Stephen M. Ross School of Business. He was invested in eradicating poverty; his book “The Fortune at the Bottom of the Pyramid: Eradicating Poverty through Profits” changed the market paradigm for businesses.

This edition is the 8th in the series of lectures organised earlier at different locations. The theme of this lecture is inspired with the ongoing global clout on an issue that is affecting the world over.

The lecture covered diverse issues like green buildings, and saving energy from getting depleted by considering at alternative energy endowments harnessed by different countries.

To know more, watch the video of the session here

Read the Full Transcript of the lecture here

E-mail me when people leave their comments –
Follow
Posted on Sankalp Singh is a Project Executive in Public Policy at Ananta Centre. He has worked as a research intern in Department of Macroeconomics in Niti Aayog, New Delhi and holds a certificate of Excellence from United Nations Humanitarian+23 Rio Summit Challenge.