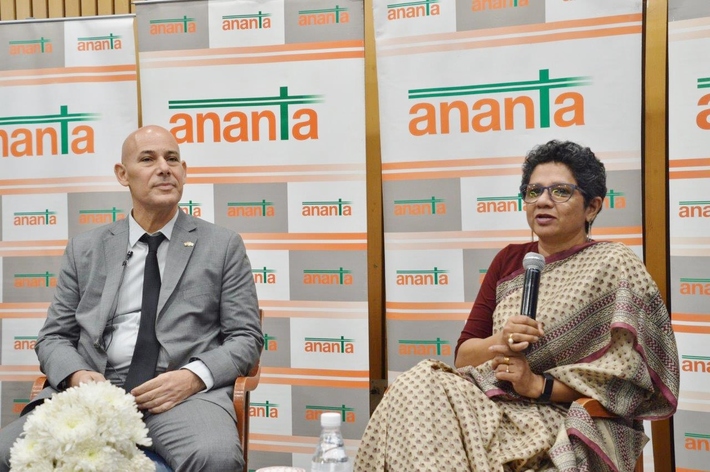 His Excellency Dr Ron Malka, the Ambassador of Israel, along with Ms Indrani Bagchi, Senior Diplomatic Editor of the Times of India as the moderator.

India and Israel established diplomatic relations in 1992, a change brought about by geopolitical realities of the time. Since then, the two nations have had extensive military and economic relations which have grown significantly. Today, India is the largest buyer of Israeli military equipment and Israel is the second largest defence supplier to India after Russia. In matters of trade, it has grown from $200 million in 1992 to $5.48 billion in 2018.

The Indian-Israeli relationship has now taken on new dimensions and expanded to science and technology, innovation, space, cyber security and agriculture.

To understand the upcoming areas of cooperation between the two, the Ananta Centre organised an interactive session with His Excellency Dr Ron Malka, the Ambassador of Israel, along with Ms Indrani Bagchi, Senior Diplomatic Editor of the Times of India as the moderator.

The ambassador highlighted water and its management as an important area of cooperation. Water stress is emerging all over the world and has the potential to be a strategic risk and cause of insecurity.

Israel has transitioned from a water-deficit state to a water-surplus state, and has pioneered the water desalination technique,asignificant achievement in the era of climate change, rapid loss of fresh water bodies, and rise in seawater levels.

The vision of Israel’s first Prime Minister David Ben-Gurion, to make the desert bloom, has been realized with advances in the arenas of rain water harvesting, sea water desalination, brackish water desalination, sewage water recycling. Presently, 90% of water used in Israel is recycled.Innovation, creativity and the right technologywere essential for the country’s progress in the water domain.

Optimizing water usage is another pillar which receives great attention by the government of Israel. There are conscious efforts to teach children about the importance of water and save water campaigns are regularly conducted to promote education regarding this value. To ensure efficiency in water usage in the agriculture sector, research was conducted to measure the amount of water in Israel and ensure that water is not lost through harvesting. Techniques such as drip irrigation, metering, non-revenue water, and precision agriculture were employed with the use of drones and satellites to see the exact amount of water which is necessary for the fields.

Israel has offered to share its successful experiences and technology with India and a strategic partnership in water has been established between the two countries. A number of water managers, from the government of India, have attended conferences in Israel to grasp their knowledge of water technology, techniques and management. Israel, in turn, has seized the opportunity and hosted a conference just for India.

Besides water, the ambassador addressed finance as another important aspect of the bilateral relationship which provides ample space for cooperation. Israel wants to expand business relations with India, especially through joint ventures in production, designing, exporting along with research and development. Israel, which faces shortages in manpower but has made tremendous strides in innovation and technology corresponds well with the Make in India initiative. Combining the engineering strengths of Israeli with the scale of Indian companies can stimulate India’s manufacturing sector, and in turn increase exports. This could be a great support in India’s bid to become a $5 trillion economy by 2022.

In order to support the Make in India initiative, it is important to facilitate the free flow of funds to make Indian an attractive investment option. Apart from integrating the financial market to facilitate free flow of goods, sharing best practices between India and Israel, banking management, and strengthening the banking sectors would also be a positive step in the bilateral relationship. Israel is looking at collaboration between market regulators and allowing Israeli investment in corporate bonds, to take advantage of thefavourable climate in both countries.

With potential in many new areas for collaboration, the future of India and Israel’s friendship is bright. This strategic relationship is an ever-expanding source of mutual benefit and growth.