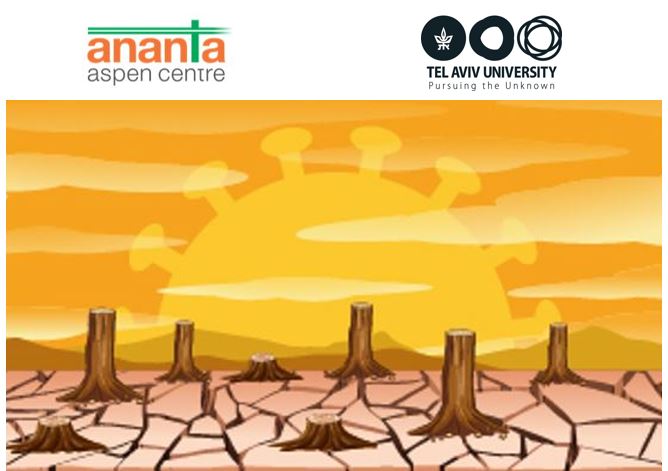 Between a Rock and a Hard Place: Climate Change & COVID 19

The world is social distancing to flatten and eradicate the curve of the pandemic but once this battle is won, a longer war awaits us.

In this webinar, we address the hard reality of combatting two existential crises at the same time: Climate Change & COVID 19. The similarities, dissimilarities and correlations between these two need to be understood to chart a way forward.

Mr. Jamshyd N. Godrej is the Chairman of the Board of Godrej & Boyce Manufacturing Company Limited. He graduated in Mechanical Engineering from Illinois Institute of Technology, USA. Mr. Godrej is the former Chairman of Ananta Aspen Centre (previously known as Aspen Institute India), Chairman & Trustee of Ananta Centre. He is the President of World Wide Fund for Nature – India. He is the Chairperson of the Board of Directors of Shakti Sustainable Energy Foundation, India Resources Trust and Council on Energy, Environment and Water. He is a Director of World Resources Institute, USA. He is also a Trustee of the Asia Society, USA. He is the Past President of Confederation of Indian Industry and also the Past President of the Indian Machine Tool Manufacturers’ Association. Mr. Godrej is the Chairman of the CII Sohrabji Godrej Green Business Centre. The Centre is housed in a LEED Platinum demonstration building which is the first green building in India and the greenest building in the world at the time when it was rated. The Green Business Centre is a Centre of Excellence for green buildings, energy efficiency, energy conservation, non-conventional energy sources, water policy, water conservation, etc. Godrej and Boyce Mfg. Co. Ltd. manufactures and markets refrigerators; washing machines; air conditioners; office furniture; home furniture; security equipment for banks (such as safes, strong room doors, bank lockers, etc.) and for commercial establishments and homes; locks and latches, forklift trucks and warehousing equipment; process equipment for chemical, petrochemical, refineries and allied industries; precision tools for sheet metal, zinc, aluminum; real estate development. The Godrej group are leaders in home appliances, consumer durables, office equipment, industrial products, consumer products and services. Mr. Godrej is an ardent yachting enthusiast and has done extensive cruising along the west coast of India, the Baltic & North Sea, the Atlantic Ocean and in the Mediterranean Sea. The President of India conferred on Mr. Godrej the “Padma Bhushan” on 3rd April 2003.

Colin Price, Professor, Porter School of the Environment and Earth Sciences; and the Head of the Department of Environmental Studies, Tel Aviv University

Prof. Colin Price is a Professor in the Porter School of the Environment and Earth Sciences at Tel Aviv University, and the Head of the Department of Environmental Studies. He is a Atmospheric Physicist, specializing in the Earth's weather and climate, with a focus on thunderstorms, climate change and natural hazards. His recent research focus is on using Atmospheric Electricity to study natural hazards such as flash floods, hurricanes, earthquakes and solar storms. He was born in Johannesburg, South Africa, in 1962. After starting his university studies in South Africa, he transferred to Tel Aviv University in 1982 where he completed his B.Sc. and M.Sc. degrees in Geophysics and Atmospheric Sciences. He received his Ph.D. at Columbia University, New York, in 1993, while working at NASA's Goddard Institute for Space Studies in New York. After completing a postdoctoral fellowship at the Lawrence Livermore National Laboratory in California, he returned to Israel and joined the faculty of Tel Aviv University in 1995. He has published more than 140 scientific papers, and has a team of more than 10 graduate students and researchers working under his guidance on various scientific research projects. He heads the Institute on Innovation in Transportation and the Institute on Nano-satellites, both at Tel Aviv University.

Dr Arunabha Ghosh is a public policy professional, adviser, author, columnist, and institution builder. As the founder-CEO of the Council on Energy, Environment and Water, since 2010, he has led CEEW to the top ranks as one of South Asia's leading policy research institutions (seven years in a row); and among the world’s 20 best climate think-tanks in 2016. He has been actively involved in the design of the International Solar Alliance since inception. He conceptualised and is a founding board member of the Clean Energy Access Network (CLEAN). With experience in 45 countries, he previously worked at Princeton, Oxford, UNDP (New York), and WTO (Geneva). In 2018, the UN Secretary-General nominated him to the UN's Committee for Development Policy. In 2018, the Government of India appointed him as a member of the Environment Pollution (Prevention & Control) Authority for the National Capital Region. His 2019 TED Talk on air quality (Mission 80-80-80) crossed 100,000 views within three weeks of release. He is the co-author/editor of four books: The Palgrave Handbook of the International Political Economy of Energy (2016); Energizing India: Towards a Resilient and Equitable Energy System (SAGE, 2016); Human Development and Global Institutions (Routledge, 2016); and Climate Change: A Risk Assessment (FCO, 2015). Arunabha’s essay “Rethink India’s energy strategy” in Nature was selected as one of 2015’s ten most influential essays. Arunabha advises governments, industry, civil society and international organisations around the world. This has included India’s Prime Minister’s Office, several ministries and state governments. He was invited by France, as a Personnalité d’Avenir, to advise on the COP21 climate negotiations; and also advised extensively on HFC negotiations. He served on the Executive Committee of the India-U.S. PACEsetter Fund. He has been a member of Track II dialogues with ten countries/regions; and formulated the Maharashtra-Guangdong Partnership on Sustainability. His monthly columns in the Business Standard (Inflexion Points) and the Hindustan Times (Over The Horizon) are widely read. He has hosted a documentary on water in Africa, featured in National Geographic and Discovery Channel documentaries on energy and climate change, and delivered a TED Talk on air quality. He is a World Economic Forum Young Global Leader, member of WEF’s Global Future Council on Energy, and an Asia Society Asia 21 Young Leader. He holds a D.Phil. from Oxford and topped Economics from St. Stephen’s College, Delhi.