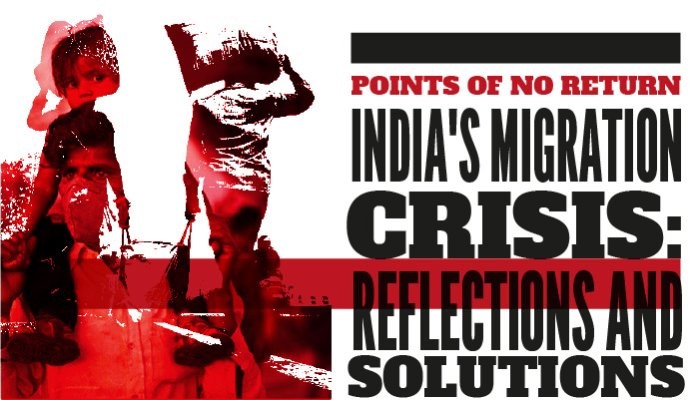 Part 4: The Migrant in Me

The fourth edition would be an introspective discussion on how helping India's migrant workforce deal with the trauma of the last two months means accepting that we too were migrants, benefited from opportunities and that we need to do the same for our fellow citizens to make this a better place. Let us look within ourselves to examine how we as individuals treat those who have displaced themselves to seek jobs, a living and a livelihood. What is it that we need to change about ourselves before we change for others ? What is the role that we can play in ensuring their future is better secured, as are their children?

Tarun Das is currently the Chairman of Institute of Economic Growth (IEG) and Sasakawa India Leprosy Foundation (S-ILF). He is on the Board of Trustees of various non- profit institutions such as Ananta Aspen Centre(AAC); Ananta Centre (AC);The Aspen Institute, USA; Council on Energy Environment and Water (CEEW);Singapore India Partnership Foundation (SIPF);Indian Council for Research on International Economic Relations (ICRIER);CII-Triveni Water Institute; World Wildlife Fund (WWF). He has been working closely on deepening international ties. He is Co-Chair of the US – India Strategic Dialogue, India- Japan Strategic Dialogue, US-India -Japan Strategic Dialogue and Member, India- Singapore Strategic Dialogue, India-China Strategic Dialogue, India-Israel Forum, India-Korea Strategic Dialogue, US - India Climate Change Dialogue. He is India Chair of the Trilateral Commission. Formerly, he was the Director General of Confederation of Indian Industry (CII) from April 1967 to May 2004 and from June 2004 to Oct 2009 he was the Chief Mentor of CII. He has authored a book: “Crossing Frontiers.” He has received Padma Bhushan for contribution in the field of Trade and Industry by the President of India; Singapore National Award (Public Service Medal) by the Singapore Government for contribution to strengthening economic ties between India and Singapore; Honorary Doctorate in Science, The University of Warwick, UK; Honorary CBE for contribution to Indo-British relations; Honorary Doctorate by the Tel Aviv University,Israel for extraordinary commitment to promoting the Indian Economy in the global arena; Sweden Royal Order of the Polar Star for contribution in strengthening Indo- Swedish relations; Order of the Rising Sun, Gold Rays with Neck Ribbon by Japan Government for contribution in strengthening India- Japan relations.

Dipankar Gupta, Sociologist and Public Intellectual, was formerly a Professor at the Centre for the Study of Social Systems, Jawaharlal Nehru University from 1980–2009. From 1993-95, He was associated as a Professor with the Department of Sociology University of Delhi. He has also been a distinguished professor and Director, Centre for Public Affairs at the Shiv Nadar University. His Non-Academic Positions include being a Director at the Reserve Bank of India from 2012-16, and Director at the NABARD from 2012-16. Currently, He is a trustee of the Economic and Political Weekly Magazine (EPW) and a member of Bankers Institute of Rural Development. He has authored and edited 21 books, from which his recent ones are From People to Citizens: Democracy’s must take Road, QED: India Tests Social Theory, and Talking Sociology. Some of his articles include Against Thresholds: Raising Capacity and Formalizing the Economy in the Indian Journal of Labour Economics, and Individuals Possess Rights: States have Duties in Arvind Datar ed., Essays and Reminisces: Festschrift in Honour of Nani A Palkhivala, Mumbai: LexisNexis. He started the Business Ethics and Integrity Division at KPMG from 1998-2003. He has also served as a Senior Advisor in KPMG from 2004-07. In 2010, He was awarded Chevalier De L’orde des Arts et Des Lettres (Knight of the Order of Artes and Letters) by the Government of France.

Naghma is the Chief Operating Officer (COO) and member of the Board of Directors at EdelGive Foundation. Over the last eight she has enabled growth and scale for the organizations the foundation supports and fostered strategic partnerships within the philanthropic network. She has also developed and nurtured two large collaboratives with diverse stakeholders, that are working with some of the most vulnerable communities to support education for children and economic and social empowerment of women. Naghma is a Chartered Accountant from the Institute of Chartered Accountants of India (ICAI) and has a Master of Commerce (M. Com.) degree from Pune University.

Govindraj is a television & print journalist and founder of Boom, a fact-checking initiative. He anchors seasonal shows on Indian news television--the current one being Aegons of Business on Bloomberg Quint, and the most recent being Policy Watch on public service broadcaster Rajya Sabha TV. He also writes for newspapers such as Business Standard. Previously, Govindraj was Founder-Editor in Chief of Bloomberg TV India, a 24-hours business news service launched out of Mumbai in 2008 and a partnership between Bloomberg LLP and the UTV Group in India.He is a Fellow of The Aspen Institute, Colorado, and a winner of the BMW Foundation Responsible Leadership Award for 2014 and the 2018 McNulty Prize.