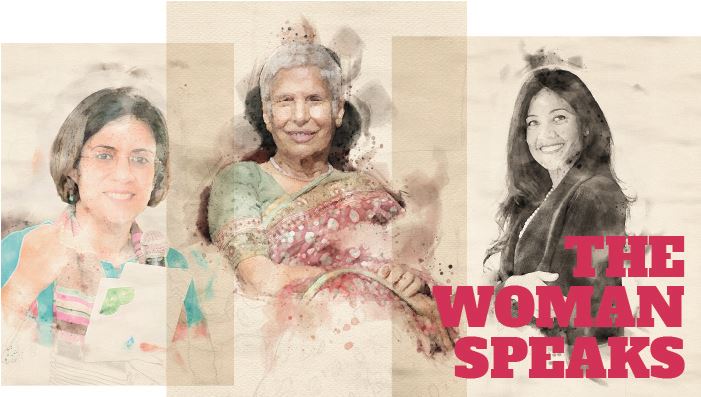 Looking at the Future: Building a New Normal

“The Woman Speaks” is a series of dialogues on women and gender issues which will highlight areas of concern to women – on a platform developed by women, for women and dedicated to women. These areas include developing strategies for increasing a woman's access to opportunities, resources and public spaces, her power and control over her own life – in the homestead or workplace, and, most importantly, her ability to affect change wherever she is situated. These dialogues will also serve to bring to the fore women of substance in various professions.

Part VI will focus on the future and the main learnings from the pandemic for the leaders – about themselves, their co-relations (personal and professional), and the way they are building their own organisations and/or organisations that they support and where do they see their role in shaping society. The virus is not going anywhere so how are we going to co-exist and what would be the new normal.

Anu Aga began her industry career in Thermax in 1985. In ‘91, she took charge of the company’s Human Resources function. In 1996 after her husband Rohinton Aga passed away, the Board appointed her as the Executive Chairperson of the Thermax Group and two years later she continued as Non-Executive Chairperson. She retired as Chairperson in October 2004. As Chairperson, Ms. Aga anchored the turnaround of Thermax through four major initiatives: reconstitution of the board, shedding of non-core activities, rightsizing of operations and increased focus on the customer. She is also instrumental in driving a high performance culture. Recently she retired as the Director on the Board of Thermax and also from chairing the Thermax Foundation. Mrs. Aga now spends more time for social causes and travelling. Her area of interest is improving the quality of school education for the economically underprivileged. She is keenly involved with Akanksha and Teach for India and is a member on their boards.

Radhika Bharat Ram, Joint Vice Chairperson of The Shri Ram Schools seamlessly straddles championing different domains in the field of education, crafts and social service wherein she strives to make an impact on people’s lives. A passionate educationist, she has been instrumental in setting up The Shri Ram Millennium Schools and The Shri Ram Early Years. She is on the board of SRF Foundation, which predominantly works in the area of rural education. A staunch supporter to the cause of inclusion, she serves as the Joint Secretary of The Blind Relief Association, New Delhi and Chairperson, The Indian Blind Sports Association. She believes in working at the grassroot and essays the role of a culture revivalist in the true spirit as the Secretary of Delhi Crafts Council to support the cause of handloom weavers and artisans. An advocate and supporter, she is the trustee of CAPED –Cancer Awareness, Prevention and Early Detection that has been working in the area of awareness creation for women cervical cancer. Since 2014 she has been a jury member of CII Foundation Women Exemplar Program, which recognises women who are transforming rural India. A break from work is well spent indulging in her passion for music and running half marathons. She has been part of 5 NGO fundraisers productions as one of their lead singers.

Reshma Anand is the CEO of Hindustan Unilever Foundation (HUF); a corporate foundation focused on creating sustainable water security solutions for India. A business school graduate with over 20 years of leadership experience in mission driven organisations, Reshma started with a conventional corporate career at Unilever in India in roles including market intelligence, product innovation and brand management. As work took her to rural outposts across India, she shifted gears to work on development challenges through market-based solutions. She is the founder of two social ventures including an advisory firm on sustainable impact and an accelerator for micro entrepreneurs. Reshma’s engaged extensively with non-profit organizations and philanthropists to develop purposeful missions with resilient leadership. In her current role, Reshma leads HUF’s growing footprint across the country through programmes that deliver water numeracy, conservation, citizen-led water governance and behavioural change in water use amongst farmers. She is an economics graduate from the University of Delhi, an MBA from IIM-Bangalore, an Aspen Fellow and a TED India Fellow. She also anchors a programme for young women leaders in business, government, media & arts and civil society to guide their journey from purpose to success.

Amitav is the Founder and CEO of The Education Alliance, a non-profit organization focused on improving the quality of education in Government schools. TEA works with the state governments of Tamil Nadu, Madhya Pradesh, Delhi and the South Delhi Municipal Corporation. Prior to founding The Education Alliance, Amitav was Country Director, ARK India, a UK based NGO. Amitav and his team launched several programmes focused on school leadership, English language literacy, school vouchers and school quality assesments. Amitav worked for Bristol Myers Squibb based in Princeton for 5 years. He has also been involved with his family-run business in Punjab since 1994. Amitav was educated at the Doon School and went on to study Economics at St. Stephens College, Delhi University. He has an MBA from UNC Chapel Hill, USA. He sits on the board of AVPN India, Childrens Book Trust, Virmani Education Trust, Teach for India (Delhi) and Shri Ram Schools. Amitav is a member of the CII-Northern Region Education Task Force and also a member of the International Board of Advisors for Kenan Flagler Business School, UNC, and Chapel Hill. Amitav is an Aspen Fellow, Ashoka Fellow and an N/Core Fellow.