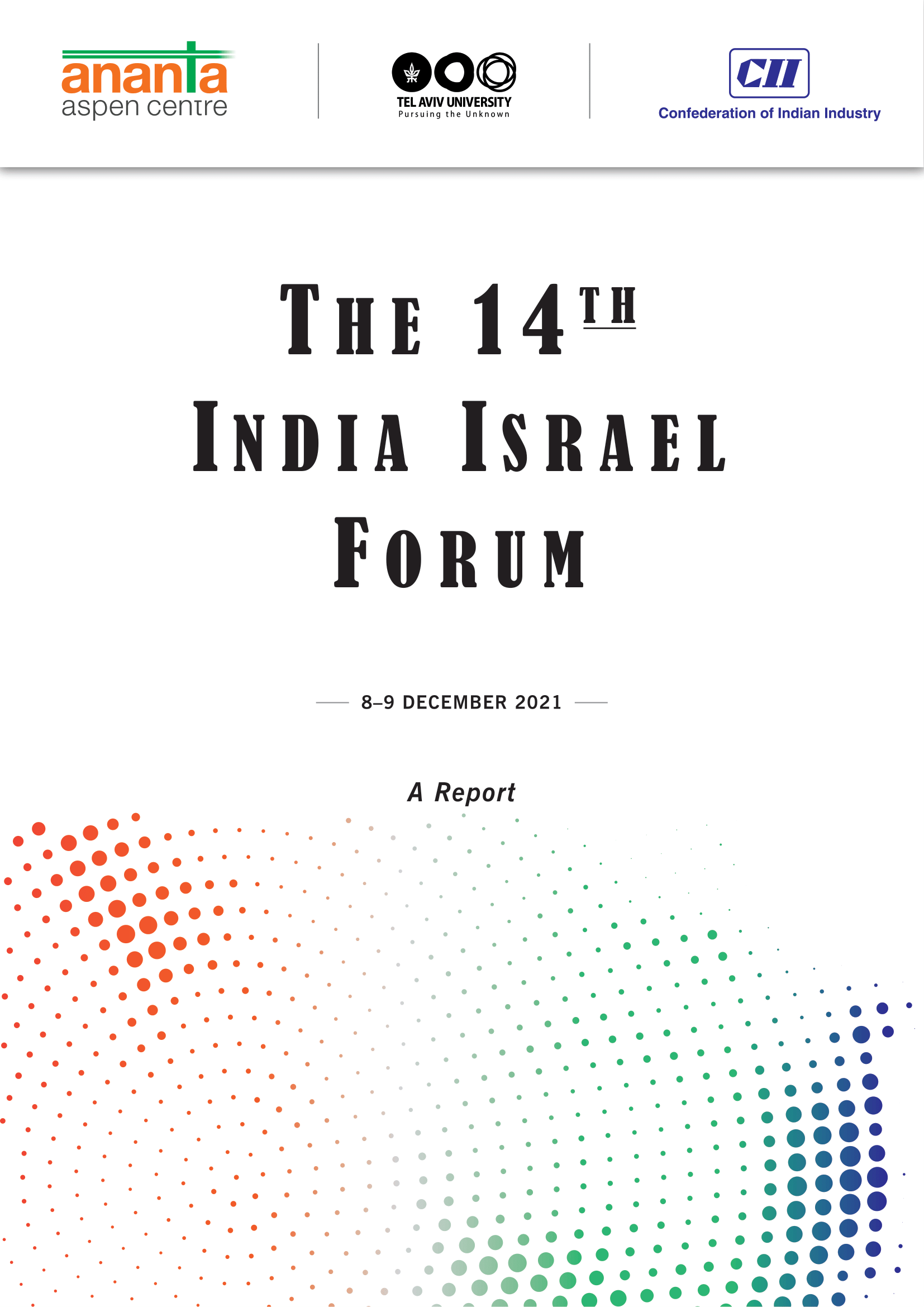 The 14th annual meeting of the India-Israel Forum was held virtually 8th & 9th December 2021. The Forum was co-convened by the Ananta Aspen Centre, Confederation of Indian Industry and Tel Aviv University. This edition of the Forum reflected on past efforts as well as recent developments to strengthen the bilateral relationship; and deliberated on measures to be taken to secure a sustainable future and bolster the relationship. Key government officials, stakeholders, academics, and experts from The 19th India–Korea Strategic Dialogue, co-convened by Ananta Aspen Centre, the Korean Foundation, and the Seoul Forum for International Affairs in partnership with the Ministry of External Affairs, Government of India was held virtually on 23rd September 2020. The participants included policymakers, representatives of the government, health experts, business leaders, academicians, and journalists from both India and Korea.
The theme for this year’s dialogue was “Crafting New Korea–India Str

Afghanistan, Russia and the United States are set to hold a trilateral video conference in July-mid to discuss facilitating intra-Afghan negotiations, said Russian envoy for Afghanistan.
Zamir Kabulov, Moscow’s point man on the matter, said the meeting would be held on 15th of June.
“The negotiations will be held with the US special envoy for Afghan peace, Zalmay Khalilzad and the foreign minister of Afgh

Up to 6,500 Pakistanis among foreign terrorists fighting in Afghanistan: UN
The Khaama Press | 3rd June

The presence of thousands of foreign terrorists including up to 6,500 Pakistani nationals pose a complex challenge for the Taliban group to prove its credibility as a counter-terrorism partner following the signing of peace deal with the United States, the United Nations said in its report.
“The Monitoring Team now estimates that ISIL-K numbers are as low as 2,200 in Afghanistan. It remains

The 12th annual meeting of the India-Israel Forum was held on 16th–17th December in Tel Aviv, Israel. The Forum reflected on past success, considered the contemporary challenges and discussed ways to jointly work together to deepen bilateral ties. The Forum has continued to grow over the years, and this year new ground was covered by focusing on four key areas – Water security, cross border investments, Artificial Intelligence and Quantum opportunities in both countries.

ASPEN INDIA focuses on leadership development and frank and open dialogue on the most important problems and challenges facing society at large and helps foster the transformation of Indian society.

Ananta Aspen Centre focuses on leadership development and frank and open dialogue on the most important problems and challenges facing society at large and helps foster the transformation of Indian society. It also engages the civil society, inclusive of business, NGOs, governments and other stake holders on issues of importance to India’s development and national security.

On December 6-8, 2017, the India-U.S. Track II Dialogue on Climate Change and Energy held its seventh meeting in New Delhi, India. Convened by the Ananta Aspen Centre, India, and the Aspen Institute, U.S., this dialogue, since its inception in 2010, has brought together a diverse array of thought leaders from India and the United States – including former senior government officials, industry leaders, and heads of civil society organizations – to inform and encourage India-U.S. partnership at a

The Japan-India Strategic Dialogue (track 2) under the co-chairmanship of Mr. Yoshiyuki Kasai, ChairmanEmeritus, Central Japan Railway Company, and Mr. Tarun Das, Founding Trustee, Ananta Aspen Centre, andFormer Chief Mentor, Confederation of Indian Industry (CII), was held in Tokyo from 23rd -24th May 2017.The dialogue was initiated in 2006 and is currently in its 11th year. Inaugurated, initially, as a trilateral withUSA, Japan and India, this meeting was also attended by Mr. Richard Armitage,

The tenth meeting of the India Israel Forum was held on 13 November 2017 in Tel Aviv. As the two countries commemorate 25 years of engagement, the Forum alongside celebrated 10 years of this Track II initiative. From what was described as “non-relations”, IndiaIsrael relationship has evolved into the most enduring one and this Forum is privileged to make its modest contributions towards strengthening this partnership.

The United States is the most important political, economic and military power today yet it is no longer the only nation that controls every international event as in the past. In the last few months, there has been an uncertainty in the USA. However, it is still a very important country for all the other nations in the world. Commentators have begun to say that while the US for decades has remained preeminent, it will no longer pre-dominate; neither will any other country wear the cap of a worl

The ninth annual meeting of the India Israel Forum was held on 22 – 23 December 2016 in Mumbai. For the first time the meeting was held outside New Delhi in order to expand outreach and bring stakeholders from the financial hub and nearby regions. The meeting represented both continuity and renewal.The gathering included experts and stakeholders who have been here since the very beginning and at the same time, added new members this year, and introduced a new issue area for discussion – Water Te

Delegations from the United States and India met for the Twenty-First US-India Strategic Dialogue in Washington on December 11-14. Organized by the Aspen Institute, the Confederation of Indian Industry (CII) and the Ananta Aspen Centre, the session was co-chaired on the US side by Professor Joseph Nye, a University Distinguished Service Professor at Harvard University, and Nicholas Burns, the Goodman Family Professor of the Practice of Diplomacy and International Relations at Harvard University.

Delegations from the United States, India and Japan met for the eleventh U.S.-Japan-India Track Two Strategic Dialogue in Washington on December 10-11, on the eve of the important summit between Prime Minister Shinzo Abe and Prime Minister Narendra Modi in Delhi. The session was organized by the Center for Strategic and International Studies in partnership with Ananta Aspen Centre and the Confederation of Indian Industry (CII) and co-chaired by CSIS President and CEO John J. Hamre and former Dep

Ambassador Bhojwani referred to the lack of consciousness within India of the reality of LAC. Its cities are not further than North American destinations. Unfamiliarity with Spanish and
Portuguese, even in India’s academic institutions, hampers independent, deeper and objective assessment of the potential of LAC. More official patronage is required to promote the
relationship.

On October 23, 2015, Ananta Aspen Centre and Global Relations Forum hosted the 5thIndiaTurkeyForum, at the Hilton Bosphorus Hotel in Istanbul. Co-Chaired by GRF Vice-Chairman and President Mr. Memduh Karakullukçu and Ananta Aspen Centre Chairman Ambassador Satinder K Lambah, the meeting consisted of three sessions during which the participants focused on the following topics:

ROUND TABLE REPORT - INDIA AND RUSSIA: TIES IN A TESTING TIME August 25, 2015

The India-Bhutan Strategic Dialogue took place in New Delhi on April 3 and 4, 2014. The dialogue focused on: